A Moonlight Adventure with the Maiden of the Sea

By Lakwatsarah April 12, 2010
Manila Ocean Park’s newest addition to its list of attractions, Acquatica is now open to public and its latest feature, “The Maiden of the Sea”.
Upon purchasing a P500 worth of ticket and a few hours of tour at the Oceanarium, we left the park at around 3pm and went back at 6:30 pm for the Maiden of the Sea. We were greeted by a line of excited groups, mostly with families and friends. I later realized it is an outdoor show. Having no clue of what to expect, I began imagining some cunning dolphin performances. At the entrance, we were given some disposable raincoats and were instructed to wear it during the show. Boy was I excited, there’s going to be some cool splashes after all!

Some few minutes before the show, we were surprise by a cluster of towering water fountains making its initial splash, giving us an obvious clue of what the raincoats are for. We hurriedly put those on!

And so the show begins with enchanting nature music, green shaft of lights and an impressive voice over. A group of young performers entered its way on the stage and started singing and dancing. Aha! A musical outdoor play! The story of The Maiden of the Sea is about a kingdom that has done harm to Mother Earth and was punished. Little kids will surely love the cast, aside from the "human" performers, what makes this show really appealing are the singing deep sea cartoon characters revealed brilliantly thru a 3D hologram with the help of some giant water screens. Well that speaks high-tech! 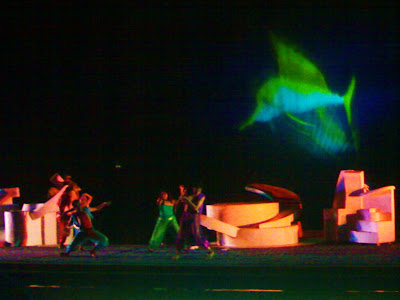 Watch this finale part of the Manila Ocean Park's Maiden of the Sea. You can view more scenes at youtube. It is a happy ending by the way!

After 30 minutes, we left our seats fortunately still dry. The pyro effects, the lights, the cute 3D characters, gigantic water fountains and the energy of the whole performance are all but amazing. I highly recommend Maiden of the Sea for families wanting to see a different kind of fun outdoor musical.   Hungry for food, we went back to the mall and had our dinner at the Makansutra.
maiden of the sea Manila manila ocean park musical fountain show