By Lakwatsarah November 14, 2010
Philippines is now celebrating for yet another victory from the country's sports icon and number one pound for pound best boxer in the world, Manny Pacquiao.

His yesterday's victory made me remember my Gensan visit some few months ago, the night I was able to see the outside of his newest building in General Santos, the JMP Building situated just few feet from my aunt's steak house. I was excited to see the inside of the building then, but alas something happened with the building's generator that very night, just some few minutes after we finished our dinner.
Lights were turned off. Next thing I knew, a firetruck and a convoy passed by. Hmm...I was kinda hoping Pacquiao to be at the scene :) Good thing they were able to resolve the problem very quickly and was able to return the electricity. After all, the night is still young.

JMP building (named after Jinky and Manny Pacquiao) is located at South Osmena St. General Santos City.
The next day, my aunts and I went shopping at Robinsons Gensan. And you bet, I was glad to see the Team Pacquiao Store. For PACMAN fans out there, the store would definitely be heaven. One could buy all sorts of souvenir items from jackets to as little as keychains. For sure tourists would once again flock the store after Pacman's victorious fight against Margarito. 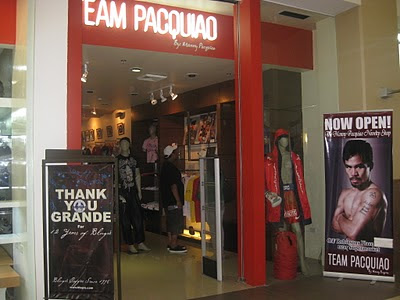 I will be flying back to South Cotabato this week for my lola's burial. To my dear readers out there, I would greatly appreciate some prayers for my dearest lola, thanks.
General Santos JMP Building Team Pacquiao Store