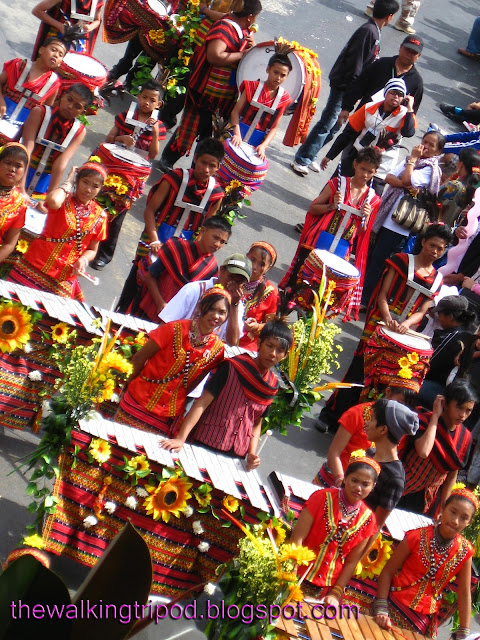 February 27, 2011. An estimated half a million people flocked the streets of Baguio to watch the yearly anticipated event of Baguio city’s 16th Panagbenga Grand Float Parade 2011 . The Festival theme this year : “The Environment and Community in Harmony.” This Flower Festival has surely brought in a great amount of revenue to the local government – good news to Baguio’s tourism industry, horrific to many travelers! (check out my upcoming posts to find out why)

We hopped on a jeep from Lourdes Grotto (walking distance from where we stayed) to take us to city proper. The jeep stopped few streets from Session Road as roads were already blocked by then. We walked until we reached Hotel Veniz and made our way up to the foot bridge beside Maharlika Building. We arrived 30 minutes earlier, a time locals consider late. You see, to get some of the best spots, one must be there by 6am. Me and my friend MC agreed to stay there while my cousin Leah continued till she and her son reached SM for she still has to meet with her online buyer. We were contented with our spot except for a tree branch that was blocking some of the view. Nevertheless, we could still clearly see the happenings below.
The parade started at around 8am with bands’ drumbeats and trumpets playing Jai Ho and Lady Gaga’s Bad Romance to Justin Bieber’s Baby. The festivity has started!

Then there’s SM with their giant cute purple bunny and camouflaging fairies, Red Horse and their giant beer, Sam Milby on top of Samsung’s float (and yes, imagine the screaming fans!), there’s also the always smiling Jollibee, the velvety red float of Choco Mucho and the finale float was a moving dragon who managed to produce smoke to give a much more dramatic effect. 23 floats competed. (see more photos of the floats at The Walking Tripod)

My first Panagbenga experience was truly an event that’s hard to forget. It made me see Baguio at its best and worst. Of course the parade was indeed spectacular, a lively colorful celebration of "Session in Bloom"  has long drawn tourists and locals alike. But what happened after that is our upsetting road drama. I’ll write about that on my future posts.