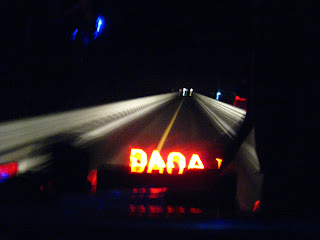 We left Baguio at about 7:30pm. Bus tickets going to Vigan costs Php294 (Partas Bus Airconditioned). My friend MC and I got our seat at the very front row of the bus while my cousin Leah and son Cocoy were seated at the back. It was a long 5 hour drive, good thing we bought Jollibee hotdog sandwiches before getting on the bus. We haven't eaten our dinner yet because of the long line at the Partas Bus Terminal. That was the day when the Panagbenga Grand Float Parade happened.

The winding roads of Baguio to Vigan is much scarier than when going from Manila to Baguio.  Good to know Partas drivers are known for excellent and safe driving. A note to those who frequently suffers from motion sickness, I recommend taking your Dizitabs before leaving.  The bus took a 15 minute stopover in a restaurant and passengers had the chance to go to restrooms, stretch and buy food. How I only wished to have taken photos of Vigan's Heritage Village at night but it was too late when we arrived. 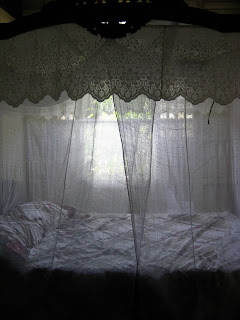 We love the house where we stayed. It's a typical old Vigan house - very roomy with dark wooden floors, bedrooms that has doors connecting to each other and wide capiz windows. Near the staircase leading of the second floor is a large sala with fine antique furnitures, a classic piano organ and a dining room holding lots of silverwares and china plates on display. Special mention would be the bed we slept, a sturdy old fourposter canopy bed embellished with a charming white mosquito net. Felt like royalty right there! But I must be admit though, it was  quite scary the first time we set foot, considering we arrived at the old house at exactly 12midnight!
Upon waking up, I looked around and saw pictures of owners along with prominent personalities like former U.S. President Bill Clinton as well as former President Gloria Macapagala Arroyo. No wonder it's such a great house, it belonged to a well known family in Vigan. We're indeed lucky! After a great Vigan breakfast, the group went on its separate ways for a while. MC and I started going around town by foot - we went to a nearby Internet shop to transfer all the Baguio pictures to my portable hard drive, we also went to look for an optical shop to buy a contact solution and withdraw at a BDO atm machine. Surprisingly, all these establishments are just walls away from each other. My cousin Leah and her son Cocoy took a short visit to their Lola, a couple of blocks away from where we stayed.
After 30 minutes, we started walking our way to Heritage Village.