After a sumptuous lunch at Ampang Homeland Yong Tau Foo Sdn Bhd, we're on to our next destination, the Batu Caves. Batu Caves is most famous for having the largest golden statue of Lord Murugan, it's both a Hindu shrine and a tourist attraction.
Click here to view more photos


We were given just less than an hour to see the whole place as we needed to get to Genting Highlands for our last stop of the day. Luckily, we saw a group of Indians inside this cute purple open tent and celebrating what seems to be an Indian wedding so the short span of time given made our trip extra special. The men were wearing white robes and women in colorful saris. I thought Indian brides should wear red based on their tradition but the bride here was wearing blue so I got a bit confused. This celebration really looks like a wedding to me  especially with the "bridal car" behind. But anyway, I rarely see something like this, so I'm just glad to be there to witness this happy event. 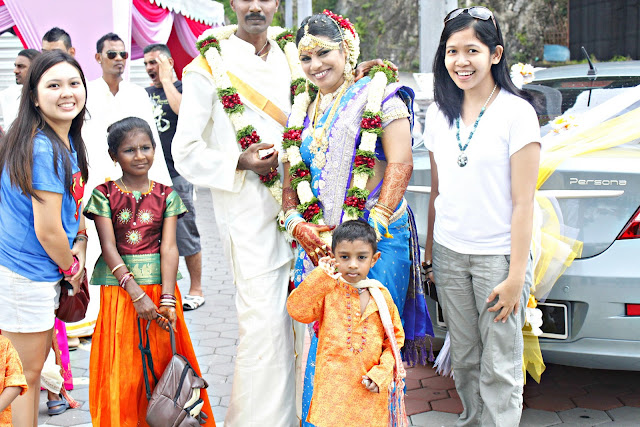 After a quick photo-op, we hurriedly walked at the foot of Lord Murugan statue which at that time was being renovated. I just noticed, the statue is being renovated, Petronas was closed for renovation and the Merdeka Square was also being renovated. Hmmm, is there a big event happening in Malaysia sometime soon?

The Hindu community is very much visible here in this place. I had a great time just watching them and see worshipers pay tribute to a Hindu god. There were also hundreds of pigeons flying everywhere. But just when we're about to climb the 272 steps staircase, it started to drizzle. We had to take cover for a while so it was definitely a waste of time considering we only have a few minutes left. The rain stopped for a while and we decided to just make a quick move up. Boy it was breathtaking! Literally!
We had our share of sweats, stops and scares. Climbing the top may look easy, but as you move up and begin to tire, it was like a never ending walk not to mention the steep narrow 272 steps. But after that  arduous climb uncovers nature's wonderful gift. Inside is a natural limestone cave system with the largest chamber, the Cathedral Cave first to greet its visitors.
Since we're running out of time, we weren't able to tour the whole area inside. Other groups were already coming down when we're just climbing up. We didn't want to cause further delay so we just quickly toured the first cave as we hear screaming sounds of monkeys from the other caves. Now that we have to go down, it started to drizzle once again! 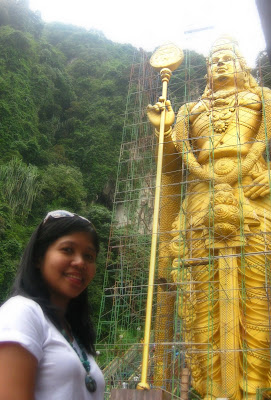 We're already soaked in sweat and showered in rain when we boarded the air-conditioned bus. Good thing I didn't get sick while on tour as we're just starting to discover Malaysia. Looking back, Batu Caves is not only a great place to understand more about Hindu religion and its faithful devotees, but it also offers an opportunity to exercise those stubborn muscles too!

This post is part of my Malaysia Incentive Trip Series: