Palawan: Inside Peek on One of the New 7 Wonders of Nature

By Lakwatsarah March 09, 2012
The two hour drive from Puerto Princesa to Sabang, passing through sharp curves on 2 part zigzag roads (yes, expect to sway inside the van) is already an adventure treat itself. We learned a lot from our tour guides Mae-Anne and Grace telling us stories about healers, folklore, history and other fun facts during the long drive while passing the scenic country charm of Palawan. This post gives you a glimpse of what happens on a typical day when you book the Php1,500 Underground River Tour.

Stop-over: Jazz Souvenir and Coffee Shop.  Aside from souvenirs, it has a viewing deck overlooking islands of Tres Marias, the Ulugan Bay and Rita Island.

Before getting to Sabang Beach where lunch was served, we were asked if we wanted to try other activities like spelunking in Ugong Rock, a mangrove paddle boat tour or try Sabang's Zipline. There were three group of  passengers in the van, the newlyweds, a barkada of three and us. I personally wanted to go to the Ugong Rock after I saw my brother's barkada pictures in Palawan, but I guess that doesn't interest my company that much so we just opted to try the Mangrove Paddle Boat Tour for a more relaxed activity.
Here we are at Sabang Beach after a buffet lunch. 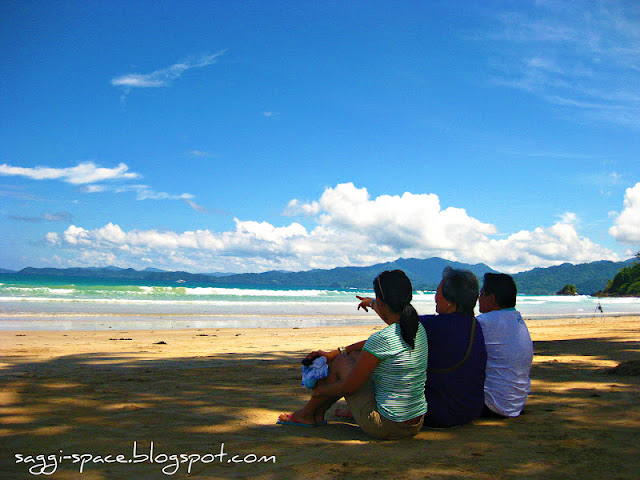 Our Underground River Tour was scheduled around 3pm, so to not waste time, our group together with newlyweds hopped on the van for a short drive for our Mangrove Paddle Boat Tour.
And literally just a few steps from where the mangroves are located is the path leading to Sabang Zipline. With our friendly tour driver nicknamed SOCO and Grace, our tour guide from Maple, we walked our way to the more secluded Sabang Beach to go with the newlyweds for their zipline adventure. We stayed at the beach enjoying the beach all to ourselves while the lovebirds walked their way up the mountain for a near kilometer zipline ride costing Php550 each.

We returned back to the more tourist-y part of Sabang to get the other three passengers and made our way to the drop off point for the Underground River Tour. Lo and behold, we were literally the last group of tourists to board a motorized outrigger. So kami pala ang magsasara ng Underground River!
The ride going to the entrance of the Underground River was pure joy. The waves were gentle and we had a fair weather, definitely not scary as compared to my journey from Batangas to Puerto Galera. It's also not crowded when compared to being there by morning or noon since we're the last group to tour the cave.


From here, visitors are asked to register and then proceed to walk into the unknown...

The clear lagoon leading to the entrance where tourists wait for their turn to ride a paddle boat is simply picturesque. We saw a monkey behind an ancient tree where we wanted to have our pictures taken. I heard one can be lucky if you see monitor lizards and other animals in the area. A word of caution from our tour guide, it's best to leave your plastic bags or food since some sneaky monkeys tend to steal things from visitors.
From the waiting area, the cave's entrance may look small but it's not. 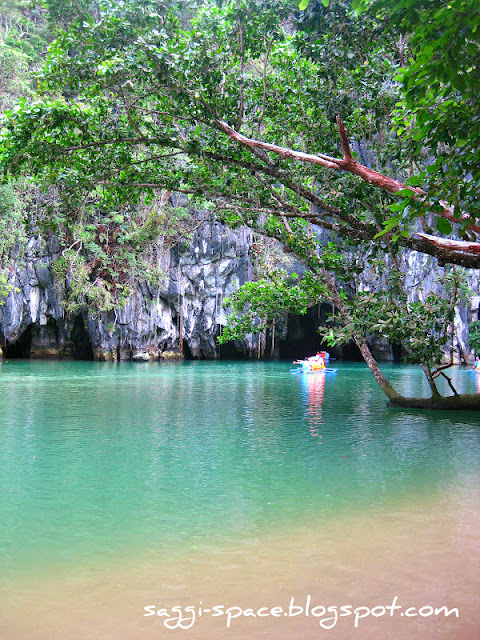 PUERTO PRINCESA SUBTERRANEAN RIVER NATIONAL PARK, a World Heritage Site
Known as the world's longest underground river, the Puerto Princesa Subterranean River National Park features a spectacular limestone or karst mountain landscape. Inside this 8.2 km long underground river that flows directly to South China Sea was the recent discovery of a 20 million year old of a serenia fossil, crystal and egg shape rock formations. On December 4, 1999, its outstanding universal value was recognized and thus was inscribed to the United Nations Educational, Scientific and Cultural Organization's (UNESCO) World Heritage Sites.
The tour became more special or spooky at one point as we were the last group to enter and leave the cave (so kami na lang talaga mga tao dun sa loob!). Despite being in almost total darkness for 45 minutes paddling across the first 1.5 kilometers of the cave's brackish water, with our smart, funny, English-speaking boatman/guide, the underground river tour has been by far the most unique travel activity I experienced in the Philippines. Although it sort of reminded me of my elementary field trip in Mystical Cave in Antipolo. But here in Palawan, expect to see how nature shaped the cave for millions of years, pre-historic limestone formations in every size and varying hues. Imagine thousands of bats and swallows flying all over, so pray you won't experience the so called "holy shit".  Promise, panalo sa punch lines mga tour guides dito! One person sitted in front will be the one to hold the flashlight as the boatman directs where interesting stalagmites, stalactites and other rock formations like a giant mushroom, candle, nativity scene, dinosaur, a horse and even Sharon Stone can be seen! They also have areas called  vegetable garden, Eiffel Tower, Cathedral and the turn around of the boat will be at the lrt-mrt station :)
More Underground River photos at the Walking Tripod
I had a lot of breathtaking moments that kept me silent in fascination but also found myself laughing out load along with the group as kuya cracks up his funny-corny and super-funny jokes.
"On your left, yan ang tinatawag na bat cave, hindi tayo diyan papasok of course, it's restricted, that is only for the bats. You need batman to go there. I'm sorry ma'am, I'm just boatman, I'm not batman! Yung ceiling po tingnan niyo, gawa yan ng batmen, diyan sila umiihi, kaya di na'to bat cave, ang tawag dito bathroom."
Imagine our English speaking guide na may Bisaya accent, super kulit ng boat trip namin at nakikisabay na din kami sa ingay ng mga bats. Sana lahat ng tourist guides sa Pinas, kagaya niya. Mas nagiging buhay at memorable kasi ang tour kapag parehong masayahin at knowledgeable ang tour guide, agree?  We were the 12th and last group that he toured that day and despite having a mild cold that he got because of previous rain showers that made the water drippings from the cave's ceiling stronger than the usual, kuya gave his full effort and all smiles pa din. As we make our way towards the light at the tunnel's opening, I smile at the thought that such exquisite beauty exists in my country. Will post our Palawan video tour soon :)
We left just in time as the sun begins to set. I would like to end this post encouraging every Filipinos to go visit the beautiful Palawan and experience the natural high and captivating beauty this Underground River Tour promises.