I Will Walk For A Scholar

By Lakwatsarah August 16, 2012
Just three days after the infamous 'rain with no name' wreaked havoc all over the flooded metro including nearby provinces, I geared up for a 2 hour commute to QC. I have already canceled a production shoot because of impassable roads and I don't want to miss this another chance to extend my support for the next day's event. I armed myself with my version of survival kit along with a few clothes on my backpack just in case I get stranded on the road.

Thankfully, the sun was smiling all throughout that Saturday. In God's grace I was able to safely reached my uncle's house in Novaliches and we're all excited for the big early morning event. I'm glad it pushed through.

I will walk for a scholar.


The ANCOP Global Walk is an annual fundraising event of CFC ANCOP which aims to raise awareness and funds for Couple's for Christ's work with the poor programs, namely Community Development and the Child Sponsorship Program. These programs are geared towards providing shelter, education, basic health care and livelihood to those living in extreme poverty. The Walk will be held in various provinces and cities in the Philippines, as well as key cities in the United States, Canada, Europe, Australia, Asia, the Middle East and Africa. (source: ANCOP Global Walk's Official website)

At the dawn of the day, we passed along streets leading to Quirino Grandstand which graced many recent news reports about the flooding, especially the tagged "olympic pool" which made many street kids happy. We're all glad the roads were already passable.

It was a great 'no rain' morning to start with as families and CFC members assembled in front of Quirino Grandstand. It was still dark but nevertheless the positive energy can already be felt. In a matter of minutes, the long 5km walk officially started and the roads began to flood with people. It's my first time to join such event and I couldn't be more happy knowing that more children will enjoy the gift of learning.

The long walk also made us see how devastated the baywalk is. 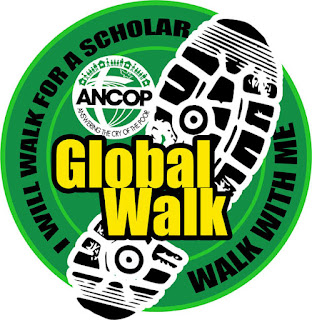 But as the old cliche goes, there's always a sunshine after the rain.  Hopefully next year, more people can participate so many deserving Filipino youth can go to school.
ANCOP Global Walk 2012 Manila Quirino Grandstand